It is 350 years since the artist’s death but visiting these two Dutch cities you can still feel the echoes of his work, and follow in his footsteps.

Rembrandt stares out at me all around. To one side he is young, eyes shaded beneath tousled hair, to the other he’s wrinkled, gummy and turbaned, and in between variously smiling, frowning, astonished, or confident beneath a wide-brimmed hat at a rakish angle. It’s a perfect start to my journey in search of the greatest of Dutch masters 350 years after his death, in the home country he never left.

This crowd of Rembrandts occupies the first room of the Rijksmuseum’s exhibition of all its works by the artist as the centrepiece of The Year of Rembrandt. Twenty-two paintings – from his only still life to his lustrous full-length portraits, the famous Jewish Bride to vast, ground-breaking The Night Watch – are displayed alongside 60 drawings and 300 original prints, rarely seen due to their fragility.

It was here in Amsterdam that Rembrandt rose to fame; and here that he died penniless and was buried in an unmarked grave in the city’s Westerkerk. But Holland’s most famous son was born, raised and started his professional life in Leiden, today a half-hour train ride away. 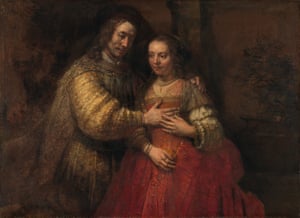 Stroke of genius … The Jewish Bride, painted by Rembrandt between 1665 and 1669. Photograph: Carola van Wijk

It’s a historic city kept young by the students of the oldest university in the Netherlands, centred on the same converted red-and-white gothic convent it occupied when Rembrandt’s parents enrolled him there in 1620 at the age of 14. Behind this I find the shady, botanical garden that saw the planting of Holland’s very first tulip – an event celebrated in the vivid flower festival held each spring. 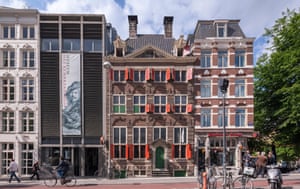 “These are the streets of Rembrandt’s childhood,” says my guide, Marike Hoogduin, as we turn into a narrow alley and look up at the step-gabled, red-shuttered facade of the Latin School where Rembrandt was educated from the age of 10. Just around the corner we find the great gothic bulk of the Pieterskerk where Rembrandt’s parents were married and buried, and their son baptised. A rehearsal of the Messiah echoes around the towering vaults as I admire the glorious, golden 17th-century organ.

Through a pretty courtyard and tiny picturesque alleyway, we reach the street where Rembrandt became an artist. Always a bit of a rebel, he refused to go to university and was instead apprenticed in the typical Dutch home we now enter. The ground floor opened last year as the Young Rembrandt Studio. 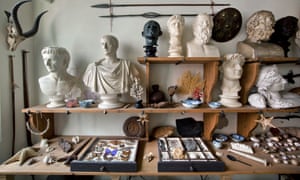 Inside the Rembrandt House Museum, I stand in the spacious, wood-floored studio where the artist painted for nearly 20 years (until he lost his home to bankruptcy). The elegant front rooms are hung with paintings, as they were when this was the artist’s shop window, and the family’s living quarters are recognisably where he drew his wife Saskia in her sick bed.

When Saskia died, Rembrandt was working on what would become his most famous painting, The Night Watch. Commissioned as a group portrait of Amsterdam’s Civic Guard, it hung in their city-centre headquarters until 1715. The building is now the NH Doelen Hotel, which I enter through the bright cream-and-gold foyer beneath the “atom-ball” chandelier to reach my entirely contemporary room.

There’s a wharf right outside the imposing 19th-century palace of art that is the Rijksmuseum, and just up the stairs inside hangs the extraordinary original painting. It’s the ideal spot to end my tour, and Rembrandt is once again peering out at me. His unmistakable face peeps from behind the guardsmen, in a picture that is less formal portrait than 17th-century video installation. It draws you into its variegated chaos of characters, shifting activity, hidden symbolism and very human faces . It is edgy, individual, avant-garde – characteristically Rembrandt, and utterly Amsterdam.

Instant Calm to the Soul: the magic of Cape Clear, Ireland

Spain by Train: From Barcelona to Seville via Madrid